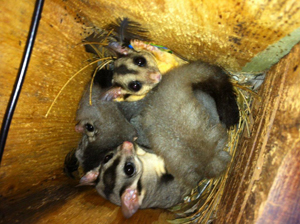 In early February 2013 several CCCG members worked with Sunshine Coast Council Community Nature Conservation Officers Nadia and Rhonda to monitor nesting boxes which had been erected several years ago in local parks. This was an excellent example of a council-community partnership that has achieved excellent results for local wildlife.

It was hard work over two days but in the end the team checked 49 nesting boxes in four parks in the catchment – 23 in Sunjewel  Environmental park and Creekside, 20 in Noel Burns park and 6 in Crummunda Park. Many local residents stopped to watch, to ask questions, to offer help and everyone said what a great job we were all doing.

Nadia and Rhonda from council, CCCG members Kym, Phil, Dot, David and Jenny and local resident Hilton, plotted each box with GPS, noted details of the type of box, what was in the box and condition, and photographed every one. Some of them were along paths but some were in the middle of bush with barbed vines making access difficult. From one box to the next, the team carried the huge, heavy ladder required to reach the boxes in tall trees. 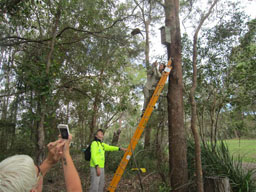 The good news is that, although it is not nesting season for birds, most of the boxes showed signs of habitation. Eleven had gliders or possums inside, two were occupied by native bees although the swarm had left one, lorikeets or other birds were noted in three.  The bad news is that two boxes, one off Lakeshore Place and the other in Crummunda Park, had been nested by Indian Mynas, an introduced pest bird that poses a grave threat to our wonderful native birds. Those boxes were removed and will be replaced in a different place.

Nadia proved fearless up the ladder on the highest trees, even with jumping and snarling possums unhappy to be disturbed. Rhonda expertly took charge of the technology and GPS mapping. Kym’s advance mapping of the area was invaluable and saved hours of looking for the sometimes hard to spot boxes. Phil, despite his recent broken arm, carried the heavy ladder like Hercules. Dot educated the team about the difference between the nasty Indian Mynas and the native Noisy Miners. Hilton, a former painter, gave expert advice on how to manipulate that awful ladder and why boxes should be oiled not painted. David and Jenny carried equipement, kept track of the paperwork and took the photographs. 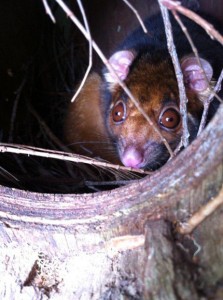