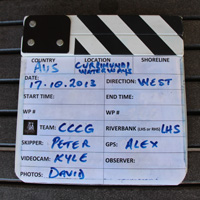 Two members of the group recently participated in a training program with MangroveWatch who developed the mangrove mapping methodology.

A video camera was used to film the entire shoreline of Currimundi lake and Currimundi Creek north and south arms recording the presence of mangroves and other vegetation. GPS readings were taken at various points along the waterways and still photographs were taken of many physical features of the foreshore and waterways.

The initial video will be used as baseline data and follow up videos will be analysed by university researchers and students to track changes over time.

Read more about why mangroves are important and what types of mangroves we have in the catchment in our project update here.

Lights on the Lake Community Festival